State of Qatar Republic of Korea

Republic of The Gambia

The Centre for Research and Training (CRT), of the Asian-African Legal Consultative Organization (AALCO) was established with a view to facilitate capacity building and enhance legal expertise in areas of international law in the Asian Africa regions. In the past, the Centre was largely engaged in research activities and in pursuance of that has brought out several publications, such as Combating Corruption: A Legal Analysis, A Study on the Concept of Terrorism, Special and Differential Treatment under WTO, Asian-African Handbook on Environmental Law etc. Building upon this foundation, the Secretariat launched from 2008 a training programme on international law for Government officials from 3 to 14 November 2008 at New Delhi.

The “General Course on International Law 2008” is intended to broaden the understanding and professional expertise in international law, with specific focus on the problems encountered by the officials in Asian and African countries. 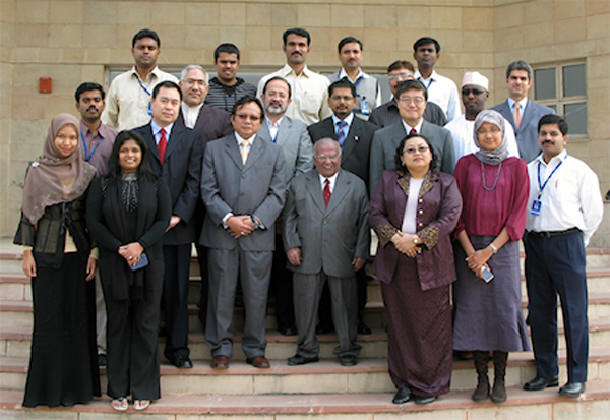 The objective is to:

The uniqueness of this course lies in its focus on fundamental aspects of international law. The course would be useful for official from legal and non-legal background.

The Centre for Research and Training (CRT), of the Asian-African Legal Consultative Organization (AALCO) organized its first Training Programme “General Course on International Law 2008” from 3 to 14 November 2008. 15 participants from 11 Member States participated in the programme. The Member States participated in the training were: Bangladesh, Malaysia, People’s Republic of China, Islamic Republic of Iran, Indonesia, India, State of Kuwait, Saudi Arabia, Sri Lanka, Nigeria and Qatar.

Prof. Dr. Rahmat Mohamad, the Secretary-General of AALCO while welcoming the participants to the Training Programme, noted that this was the first such programme organized after his assumption of office and that he would continue to strengthen the capacity building activity of AALCO in the coming years. The Inaugural lecture was delivered by  Mr. B. Sen, former Secretary-General of AALCO and Senior Advocate, Supreme Court of India, on the topic “Inaugural Lecture: AALCO – History, Role, Activities and Functions”, where he highlighted the establishment and historical role played by AALCO. He also noted that this programme was first of its kind in AALCO.

The concluding session was chaired by Prof. R.P. Anand. During the session, Prof. Dr. Rahmat Mohamad, spoke on his vision on “Redefining the Role of AALCO in the 21st Century”. Dr. Xu Jie, Deputy Secretary-General of AALCO, delivered a Vote of Thanks for all the participants, Experts and Secretariat Staff for their cooperation and support for making this programme a success. The participants are awarded with the ‘Certificate of Completion’.