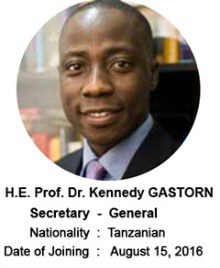 A Forum was jointly organized by AALCO and the ICRC on 15 November 2019 at the AALCO Headquarters in New Delhi to commemorate 70 years of the Geneva Conventions. The objective of the Forum was to sensitize the audience to the continued importance and relevance of these Conventions of 1949 and their Additional Protocols, and to share legal and practical measures to improve the implementation of existing international humanitarian law (IHL) obligations.

H.E. Prof. Dr. Kennedy Gastorn, Secretary-General of AALCO recollected AALCO’s engagement with the ICRC with respect to addressing contemporary challenges faced by IHL in his welcome address. On the backdrop of the then ongoing decolonization agenda, the inadequacy of representation of the interests of the people from the Asian and African States in the drafting of the Geneva Conventions was noted, and the role modern IHL has been playing in the context of Africa explored. A short historical insight on the modern IHL was adduced by H.E. Ambassador Dr. Andreas Baum from the Embassy of Switzerland in New Delhi.

Whilst emphasizing the fundamental importance of the Geneva Conventions, he observed that the 70th Anniversary marks the opportunity to renew efforts to ensure that the Additional Protocols enjoy the same universality that the Geneva Conventions enjoy. Mr. Yahiya Alibi, Head of the Regional Delegation, ICRC New Delhi stated that since 1949 there have been significant changes in the geopolitical landscape. Several challenges are posed to the applicability of IHL principles owing to, inter alia, the increasingly complex and protracted nature of armed conflicts, waging of wars through coalitions, urban nature of armed conflicts, and legal, practical and ethical concerns about new technology in warfare. Stronger humanitarian, political and academic engagements were called for to find innovative ways to address the challenges.

The first panel, moderated by Ms. Supriya Rao, Legal Advisor at the ICRC, delved into legal and practical measures to improve domestic implementation of IHL. H.E. Austin Fernando, High Commissioner of Sri Lanka and Mr. Joseph Kabakeza, Deputy Head of Mission, High Commission of Rwanda recalled the post-conflict practices adopted in Sri Lanka and Rwanda to seek solutions from within. The pertinence of the four pillars of reconciliation, i.e., truth-seeking, accountability, non-recurrence and reparation was highlighted, and the importance of seeking justice at the grassroots level was underscored. H.E. Mr. François Delhaye, Ambassador of Belgium presented his State’s experience with respect to involvement in several countries like Libya, Somalia and Afghanistan, and in peacekeeping operations of the United Nations. Guiding the attention of the audience to the recently released Challenges Report of the ICRC, Ms. Eva Svoboda, Deputy Director ICRC Geneva, reminded all that the Geneva Conventions are not a theoretical construct, but pragmatic instruments, whose national implementation shall always receive the support of the ICRC.

The second panel, moderated by the Secretary-General, pertained to the topic “Contemporary IHL Challenges- Counterterrorism, IHL and Principled Humanitarian Action”, sought to clarify prevailing misconceptions surrounding the relationship between the legal frameworks governing counterterrorism and IHL and the need to ensure that counter-terrorism measures do not restrain or otherwise adversely impact principled humanitarian action in armed conflict in keeping with IHL norms. Presenting the challenges that IHL implementation faces in Libya, Mr. Ahmed H.M. Gebreel, Chargé d'Affaires, Libya emphasized the need for comprehensive counterterrorism strategies, as rampant violations of IHL and international human rights law exacerbate the phenomenon that counterterrorism measures seek to eradicate.  Noting the proliferation of non-State armed groups in the past six years, Ms. Eva Svoboda underlined the need for new counterterrorism legislations and tightening of the existing ones. The role of dissemination of IHL as a counterterrorism measure was noted.

The Forum was attended by 73 participants from the Member States, several non-Member States, academia and organizations. Intense Q&A sessions followed the panel discussions, and several contemporary issues were discussed. As concluding remarks, the Secretary-General extended his vote of thanks to the ICRC, the panelists and the participants.